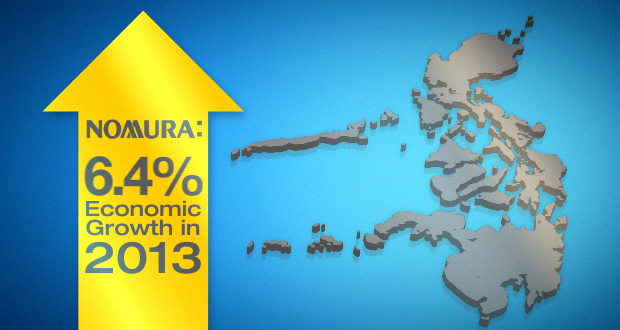 A Nomura Holdings Inc. research note indicated recently that the promise for a continued economic growth for the Philippines will remain true, a vindication of earlier local and foreign experts’ upbeat growth  assessments of the state of the country’s economy that is seen to expand at the second-fastest pace in Asia afer China.

Japan-based Nomura’s visiting experts, comprised of Euben Paracuelles, Robert Subbarraman and Craig Chan, made the declaration in a February 28 research note about the country’s growth that will likely reach 6.4 percent this year as compared to the government’s target of 6 to 7 percent. Last year, the country recorded a 6.6 growth in gross domestic product (GDP).

“We went to Manila to stress test our bullish outlook on the economy,” a portion of the research note read, adding that “We left Manila vindicated that our optimism is well founded and saw plenty of signs the story will remain positive.”

On the local currency, the Nomura team’s outlook is hovering at “restrained” eventhough the group sees the Philippine peso to appreciate further. It projected the short-term forecast of P39.20 against the U.S. dollar by the end of this year.

Meanwhile, the International Monetary Fund (IMF) in January cited the resilience of the country’s domestic consumption, government spending and low interest rates that will propel the fast growth in the country’s economy. Economic growth will push the country into a higher growth economy if the economic drivers will be sustained, according to the IMF officials.

The IMF’s growth projection for the Philippines is 6 percent this year, up from its earlier 4.8-percent economic growth target.