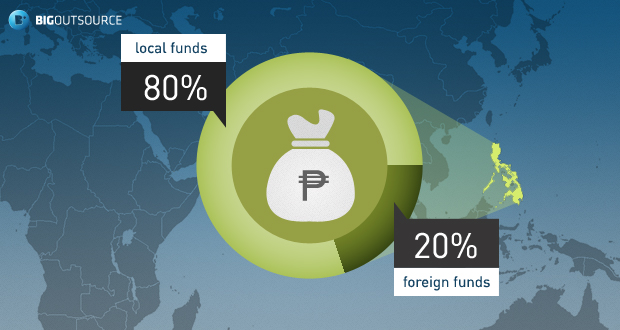 The Philippine government’s less reliance on foreign funds to support its operations reflects liquidity in its domestic economy and reduces exposure to foreign exchange risks, according to the latest report from Moody’s Investors Service.

Among other emerging markets in Asia, the Philippines was praised by Moody’s for their “low dependence on foreign-currenty-denominated external financing.” In its “Emerging Asia 2013 Government Financing Needs: Funding to Remain Mainly Local Currency” report, Moody’s says this “imparts stability to government finances.”

Factors that led to the declining reliance on foreign funds include the falling budget deficit of the country in the midst of growing economy. Moody’s explains the Philippine government now has the luxury to borrow more from domestic sources as a result of the enormous liquidity parked in the local banking industry.

Moody’s predicts the total financing requirements of countries in the region will drop as a percentage of gross domestic product in 2013. This projection is based on expectations that the hike in their borrowing requirements will be slower when viewed against the growth in these nations’ respective economies.

The country’s borrowing requirement is seen declining to 6.6 percent of GDP this year, compared to 7.6 percent last year. The Philippines’ current Moody’s rating is Ba1, just a notch below investment grade.

Moody’s, among other capital market players, project an investment grade upgrade for the Philippines within the year.  The foreign credit agency is optimistic the country’s image among investors will improve if it will carry out on improving its debt metrics and regulatory reforms.